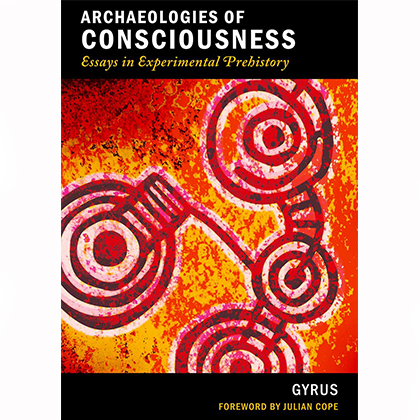 Sorry, Archaeologies of Consciousness is out of stock.

Spanning ten years of independent research into prehistoric art and monuments, altered states, folklore, mythology and occult practice, this is the first collection of writings by Gyrus, creator of Towards 2012 and Dreamflesh Journal.

The early in-depth essays ‘The Devil & The Goddess’ and ‘The Goddess in Wharfedale’ exemplify a “hands-on” approach to prehistory, combining practical magic with scholarly research in a loosely controlled orchestration of dreams, experiences in archaic landscapes, archaeology & anthropology, myths & archetypes. Casting a wide net into the dark waters of the past brought up some ideas that didn’t survive the glare of more rigorous analysis. Yet some—especially the author’s obsession with vortex imagery associated with altered states and prehistoric art—unwittingly resonated with the then cutting edge of academic archaeology, brought to popular attention recently through David Lewis-Williams’ books The Mind in the Cave and Inside the Neolithic Mind.

Beyond such “hits and misses”, the author emphasises an experimental, playful approach to investigating the past that tries to avoid the frequent sterility of academia, the loopier aspects of “fringe” research, and the brittle literalism of both.

‘Aspects of Shamanism’ and ‘Form & Meaning in Altered States & Rock Art’ attempt to draw lessons from these forays for the wider study of prehistoric art, culture and consciousness; ‘Aeons Past & Present’ presents a mythical understanding of the major periods of human history, and how they can be mapped to distinct modes of consciousness; and reviews of Steven Mithen’s The Singing Neanderthals and Andy Letcher’s Shroom present critical appraisals of two important recent works engaging with the archaic mind.

Exclusive to this collection are: a full index; an in-depth introduction exploring the essays’ relationship to animism and our current ecological crisis; an appendix on the enigma of the “ladder motif” in carvings from Rombald’s Moor in Yorkshire (one of which is the basis for Andy Hemingway’s stunning cover art); new art and photographs, including contributions from The Modern Antiquarian online community; and a foreword by Julian Cope.

Foreword by Julian Cope
Introduction by Gyrus
The Devil & The Goddess
The Goddess in Wharfedale
Aspects of Shamanism
Form & Meaning in Altered States & Rock Art
Aeons Past & Present
Review of ‘The Singing Neanderthals’ by Steven Mithen
Review of ‘Shroom’ by Andy Letcher
Appendix I: Further Reading
Appendix II: The Ladder Motif
Index

Gyrus is just one gifted and highly independent Western truth seeker, but I believe him to be one of the very best. For his writing alone, Gyrus is worthy of our trust. But for his superb and enduring research, he is worthy of our deep gratitude.

Julian Cope (from the Foreword)

Gyrus’ works of alternative archaeology have long been known and admired among Earth Mystics, Psychonauts and Pagans. I look forward, with this publication, to seeing this influence extend to a wider readership. It offers the opportunity to engage in a sustained way with a most original and penetrating scholarly mind.