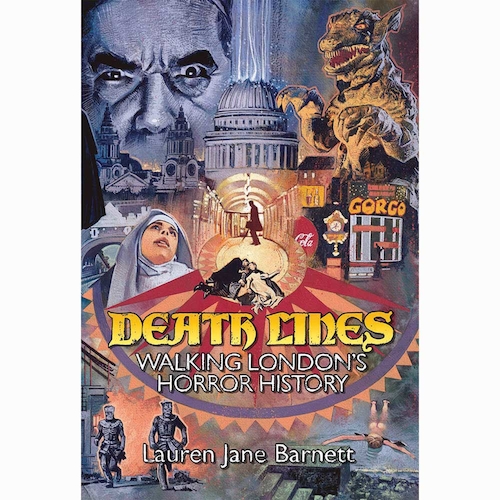 The first walking guide to London's role in the evolution of horror cinema, inspired by the city's dark histories and labyrinthine architectures.

Death Lines is the first walking guide to London's role in the evolution of horror cinema, inspired by the city's dark histories, labyrinthine architectures, atmospheric streetscapes, and uncanny denizens. Its eight walks lead you on a series of richly researched yet undeniably chilling tours through Chelsea, Notting Hill, Westminster, Bloomsbury, Covent Garden, and the East End, along the haunted banks of the river Thames, and down into the depths of the London Underground railway.

Each tour weaves together London's stories and takes the reader to magnificent, eerie, and sometimes disconcertingly ordinary corners of the city, unearthing the literature, legends, and history behind classics like Peeping Tom and An American Werewolf in London, and lesser-known works such as mind-control melodrama The Sorcerers; Gorgo, Britain's answer to Godzilla; tube terror Death Line; and Bela Lugosi's mesmeric vehicle The Dark Eyes of London. Tinged with humor, social critique, and more than a few scares, Death Lines delights in revealing the hidden and often surprising relationship between the city and the dark cinematic visions it has evoked. Whether read on the streets or from the comfort of the grave, Death Lines is a treat for all cinephiles, horror fans, and lovers of London lore.