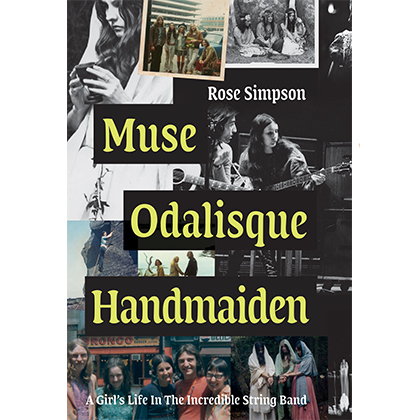 Heavily illustrated in BW & 16 colour pages, with many never-seen-before images from the author's personal archive.

HB (edition of 500 copies) £25, with a bookplate signed by Rose Simpson

Between 1967 and 1971 Rose Simpson lived with the Incredible String Band (Mike Heron, Robin Williamson and Licorice McKechnie), morphing from English student to West Coast hippie and, finally, bassist in leathers. The band’s image adorned psychedelic posters and its music was the theme for an alternative lifestyle.

Rose and partner Mike Heron believed in, and lived, a naive vision of utopia in Scotland, but they were also a band on tour, enjoying the thrills of that life. They were at the centre of Swinging London and at New York's Chelsea Hotel with Andy Warhol’s superstars. They shared stages with rock idols and played at Woodstock in 1969. Rose and fellow ISB member Licorice were hippie pin-ups, while Heron and Robin Williamson the seers and prophets of a new world.

Through a haze of incense and marijuana, they played out their Arcadian dreams on stages brilliant with the colours of clothes, light-shows, rugs, cushions, and exotic instruments. But like most utopias, the ISB’s imploded, leading from psychedelic dream-world to the harsh alternate realities of Scientology and celebrity.

Never seeing herself as a professional musician, Rose retained an outsider’s detachment even while living the life of a hippie chick. Her dreamy, yet firmly-grounded memoir gives voice to those flower-wreathed girls whose photographs have become symbols of the psychedelic sixties.

We have a few signed bookplates left from the run of hardback copies. The first few orders for the paperback edition will be shipped with one of these.