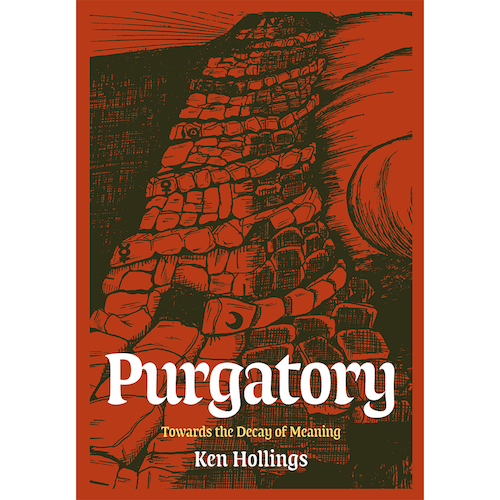 Purgatory
The Trash Project Volume 2: Towards The Decay Of Meaning

For this sequel to 2020’s Inferno, Ken Hollings turns his attention to Europe at the height of decadence and decay, following the twin fates of Hallward and Hancock as they are drawn, like so many nineteenth-century artists, towards the French capital. It was here that August Strindberg struggled to turn iron and carbon into gold, while esoteric aesthete Sâr Péladan staged his sumptuous Salons de la Rose+Croix.

In thirty-three essays modelled on Dante Alighieri’s Purgatorio, personal reflection, historical incidents and unexpected mythological correspondences combine to unearth a restless underground of alchemists, poets, painters, and philosophers. Their influence would shape the future events of May 1968 and presage the emergence of a uniquely European form of Trash cinema devoted exclusively to beauty, sex and despair. Hollings’ radical retelling reveals that, while Hell may be a tough act to follow, Purgatory can be just as weird and far more dangerous.

Ken Hollings is a master of connecting the dots between avant-garde art history, outré culture and weird science.

Ken Hollings has been described as both a genius and an alien. He is the kind of writer who looks up at a million points of light in the sky and starts to connect the dots.

Energetic and enthusiastic, Hollings’ conception of trash is poetic, exaggerated and true to the conceptual and ultimately confrontational nature of the underground.