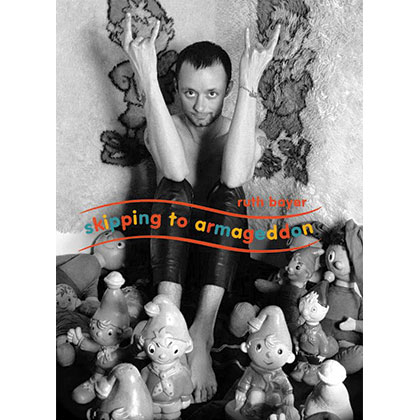 Sorry, Skipping To Armageddon is out of stock.

Skipping To Armageddon:
Photographs of Current 93 and Friends
by Ruth Bayer
With an introduction by Michel Faber, and a Foreword by David Tibet

Hardback
192pp, 220x170mm
120+ images in colour and B/W
Available from mid-August in two editions, only from Strange Attractor Press

* £35 collectors’ signed edition of 50, with photographic print signed by Ruth and David

“Like much of the music made by the artists who entrusted her to reflect their mercurial spirits, Bayer’s pictures are magic”
From the introduction by Michel Faber

Bringing together, for the first time, the music photography of Ruth Bayer, who has documented key players in the English musical post-punk underground since the mid 1980s.

A unique collection, featuring over one hundred timeless and iconic images of some of the most influential, eccentric and sometimes controversial musicians of their times.

ABOUT THE AUTHOR:
Ruth Bayer is an Austrian photographer, based in London, whose work has been exhibited at galleries all over the world. Her photographs have appeared in numerous music and style magazines over the past two decades and most recently in the book ‘The Play Goes On: The Rituals of the Rainbow