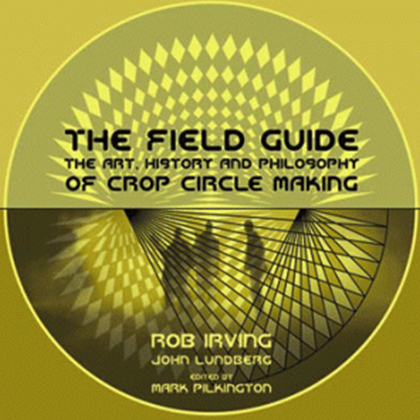 Sorry, The Field Guide is out of stock.

Three decades ago, two men in their fifties began flattening circles into the fields of Hampshire and Wiltshire. Little did they know that their Friday night antics would seed an international phenomenon that continues to change people’s lives to this day.

Now, in the first book of its kind – part history and part how-to guide – the secrets of the crop circle world are revealed, by the people behind the modern era’s most astounding art practice.

Whether you think crop circles represent a genuine mystery, a new kind of art, or an elaborate practical joke, The Field Guide is sure to leave a lasting impression. Join us in the fields for a unique exploration of this very English artform.

A particularly cerebral blend of art theory, paranormal phenomena, hoaxes and speculations, ruggedly bound and designed to fit snugly inside your knapsack while out exploring the British countryside.

Ken Hollings, in The Wire

Finally, the definitive telling of one of the strangest tales of our times: eye-witness testimony to its birth, razor-sharp critique of the baroque pseudoscience that it spawned, and by far the closest analysis yet of the artistic negotiation between the circlemaker and the believer. Designed and laid out to perfection, this is the book that the phenomenon needs and deserves.